Uran: The Birthplace of the Bharat Tile 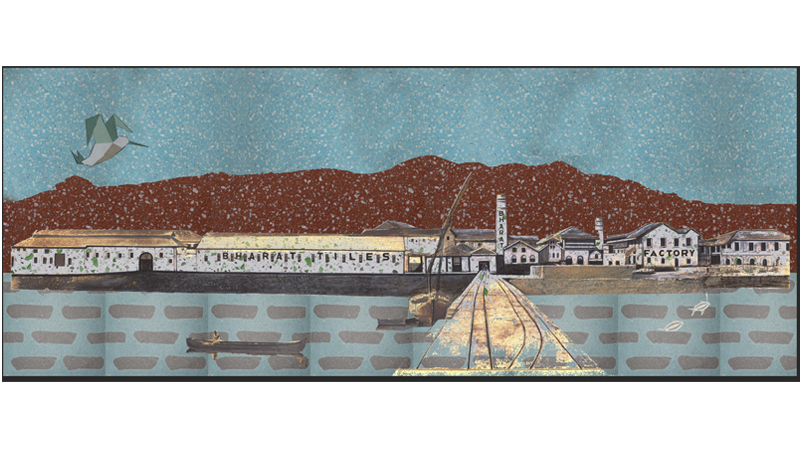 The site of creative experiments, installed with the best tile making equipment from faraway Europe. The Uran factory was where it all began.

In 1933, a full decade after Bharat Tiles had commenced its operations, a report in the Times of India described the company’s production capacities at its factory in Uran:

“The country’s largest and most efficient power factory…covers an area of six-acres, and ships tiles directly to any port. Careful testing and grading of raw materials is an important feature of the production… No person can fail to appreciate the reasons for the Bharat factory becoming one of the foremost commercial enterprises in Western India.”

The site on which Bharat’s tile factory came up had earlier been a distillery owned by the extended Sidhwa family. Uran had a significant Parsi community in the late 1800s, evidenced through the presence of an agiary and a dakhma [a Tower of Silence]. Liquor production from mahua flowers was one of the small enterprises in the area at the time.

Uran was the perfect location for Pheroze and Rustom to start a tile factory. Ample land was available, and so was a port - Mora - for bringing in cement from Porbandar. To top it all, Uran’s proximity to Bombay ensured a definite market, only a short ferry ride away.

In 1922, the factory started with 2 Italian hand presses. By the 1940s the plant would be upgraded with 13 hydraulic presses, manufacturing plain and patterned cement tiles, along with mosaic tiles which had gained in popularity in the recent past. Some other products that were believed to have been made were pre-cast steps, risers, window and door sills and, ironically, table-tops, a product that Bharat has returned to 100 years later.

Boats that ferried passengers and material from Bombay at the time could not get too close to the shore for fear of being grounded. And so, to overcome the challenge of loading large quantities of tiles easily onto the machwas, the company also built a private wharf and a one mile railway line, going from the factory to the pier. “When the tide was high, the boat was almost level with the top of the pier and you could easily load it. Eventually, to transport the tiles easily to the pier, which was across the road from the factory, they laid this mini railway track, like a toy train. And that engine would pull about 5-6 open wagons, which were stacked with tiles” recalls Mrs. Almitra Patel, elder daughter of founder Pheroze Sidhwa.

Russi Mirza, who joined as a Fitter and then went on to be the Factory Manager later, recalls two things that were erratic in Uran - electricity and water. Both, of utmost importance to a tile factory. The factory had to get on by generating electricity themselves while elsewhere batteries and kerosene fans catered to the requirements of the staff. Water, on the other hand, was required for mixing, curing and cleaning cement. To meet the requirements of the factory, Bharat had purchased 2 agricultural plots with wells near the factory from where they directed water into a large ditch on the premises.

At its height, the factory at Uran employed close to 800 workers with a capacity to manufacture 30,000 tiles per annum. During the war years, though, due to a fall in demand, the staff strength was reduced to a mere 50, out of which 10 were women. A Factory Manager, an Assistant Manager, 5 Machine maintenance Supervisors, 3 Production Supervisors, Fitters, Helpers and Mukadams made up the rest of the staff.

Across the road from the factory was a dispensary, where workers could get medical treatment at a nominal rate and with financial support from the company. These fantastic facilities allowed Bharat to proudly claim that the Uran factory manufactured an output to match the combined quantity of three other tile factories in the country. The process was one of teamwork. A group of 15 would work on the mosaic tiles and a group of 10 on the heavy use plain tiles. Every press would work for about 8 hours a day producing different types of tiles.

In 1941, Grindwell, an abrasives factory started by Pheroze and Rustom came to be founded in Uran and for a time, the two companies operated in close quarters, before Bharat moved its manufacturing operations to a new factory in Kurla. Today, Pheroze’s old school building, the dispensary and a portion of the railway line recall Bharat’s early years in Uran, and a host of happy childhood times for the family.