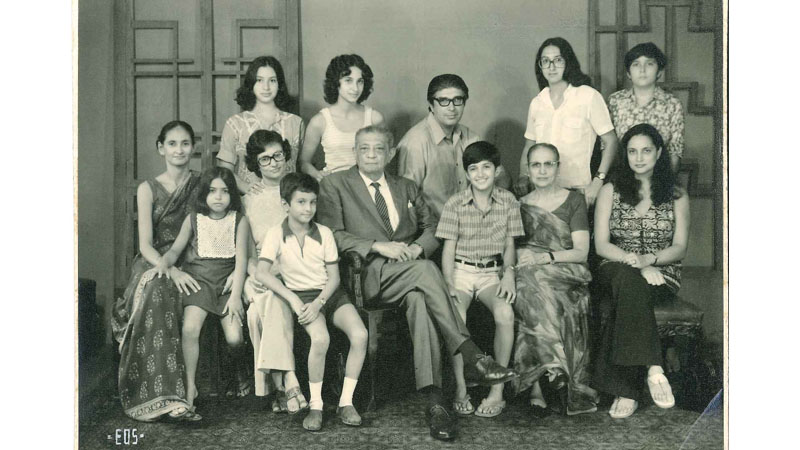 Born on 2nd June 1898 to Dhanjisha and Dinbai, Rustom Sidhwa grew up admiring his father who set up liquor shops in Bombay and cared for his nine younger siblings after the death of his parents.

Rustom, his gentle and gracious wife Mani, and his 3 daughters lived on the second floor of the family home - Dina building, which was built by his father and named after his mother. Even in later years Dhanjisha’s five brothers, their families and a sister continued living in this family home.

Rustom’s childhood was therefore spent in a large joint family with several boisterous cousins. From a young age, Rustom learned to live harmoniously among fights, disagreements, cheer and laughter.

Later in life, as the patriarch of his family, he followed in his father’s footsteps and worked selflessly for his whole extended family, and became their pillar through personal and financial troubles. Whether it was nursing sick children, supporting teenagers going through their parents’ divorce or dropping a child to college, Rustom Papa was there

Rustom didn’t bother with a college education, but joined hands with Pherozesha Sidhwa - his uncle, who was only five years older than him. The two stood by each other through whatever life threw at them for 58 years till death parted them

Pherozesha, a lawyer by education, came under the influence of Jamshed Nusserwanji Mehta, a Gandhian nationalist and theosophist, who told him , “India does not need lawyers, she needs industries”. This thought set alight an unshakeable nationalistic fire in the heart of Pherozesha. Stirred, he found a spirited partner in Rustom.

At first, the Uncle-Nephew duo plunged into coal trading for a while but soon, again on the advice and in partnership with Jamshed Mehta, whose family owned a tile factory in Karachi, they switched to manufacturing tiles in the family’s sea-side sheds in Uran.

Thus, at the tender age of 24, Rustom helped pioneer the indigenous manufacture of cement tiles, an untapped market that so far was heavily reliant on imports. Following their Swadeshi vision, the duo branded their products under the name 'The Bharat Flooring Tiles Company’.

When Bharat’s products first entered the market, Swadeshi or homegrown products were anathema to the general public – considered of poor value and suspicious quality. For Bharat, it was not just about making tiles that would compete with imported variants in quality, designs and colours, but also selling them in a market that was sceptical and indifferent.

Mindsets had to be changed. Trust had to be established.

Rustom’s grace and vitality, outgoing personality and winning pragmatism made him the perfect person to oversee sales and marketing in Bharat. He clearly understood that tiles were not just a commodity they transacted in, but there existed a deep symbiotic relationship between the tiles they sold and the ever-changing city of Bombay.

A sales office and showroom was set up in the heart of the Fort area in Bombay – at 20 Apollo Street, now 32 Mumbai Samachar Marg, where it stands to this date. Backed by a research-based high quality product, Rustom started making rounds of architects’ offices and soon the Bombay based Parsi company started making inroads into the city. Renowned Bombay families like the Cowasji Jehangirs and the Petits opted for Bharat and so did Mrs. Flora Sassoon and Sir Mohandally Databhoy for their bungalows in Malabar Hill and Peddar Road respectively. The Maharaja of Baroda’s grand palace, Jai Mahal and the iconic Watson Hotel made it to the long list of buildings floored by Bharat. As, ironically, did the British Government’s Raj Bhavans, Royal Mint and Universities !

Within five years of setting up the company, Rustom had managed to take Bharat tiles to remote corners of the city, from St. Andrews’ school in Bandra to Ismailia College in Andheri.

As the construction boom of the 1930s brought in the Art Deco craze, there was no looking back for the Bharat Tiles Company

A complimentary risk appetite enabled them to start new ventures together. They shared an obsession with Quality, Service and Innovation. Their united foray into new ventures such as Bharat Metal Printers, Lightcrete Products Ltd. (manufacturing light building materials), Vitrobrite exterior finishes, mineral wool insulation, an asbestos factory that made ropes, twines and asbestos cloth, is proof of their innovative and productive relationship.

This well-rounded pair recognised their individual limitations and respected what the other could bring to the table. Even when Pheroze’s chronic illness kept him away from Bombay for weeks at a stretch, Rustom, as the dependable partner, managed it all with calm sophistication. Pheroze’s wife Tehmi stepped in to effectively help the duo whenever Pheroze was in Bombay.

A contemporary profile of Rustom Sidhwa, published in 1966, notes that Rustom was a “figure to be conjured with”. He had the ability to get to the bare bones of a problem and could arrive sharply at alternative solutions.

Rustom died in 1980, eight years after his partner, Pheroze’s demise. He was survived by his wife, Mani, three daughters - Meheru, Bhiku and Maki and seven grandchildren.

His grandchildren fondly recall Sundays when Rustom Papa would take them to the Bharat Tiles factory, where he was happiest overseeing experiments, and how he would proudly point out buildings in Bombay, when driving them around the city, where Bharat had laid floors.

He was, as described in an article “human to the heart, stemming in the theory that a man must never forget that he is one of his clan…he was a team man and his relationship with everyone he came in contact with was distinctive and harmonious.”